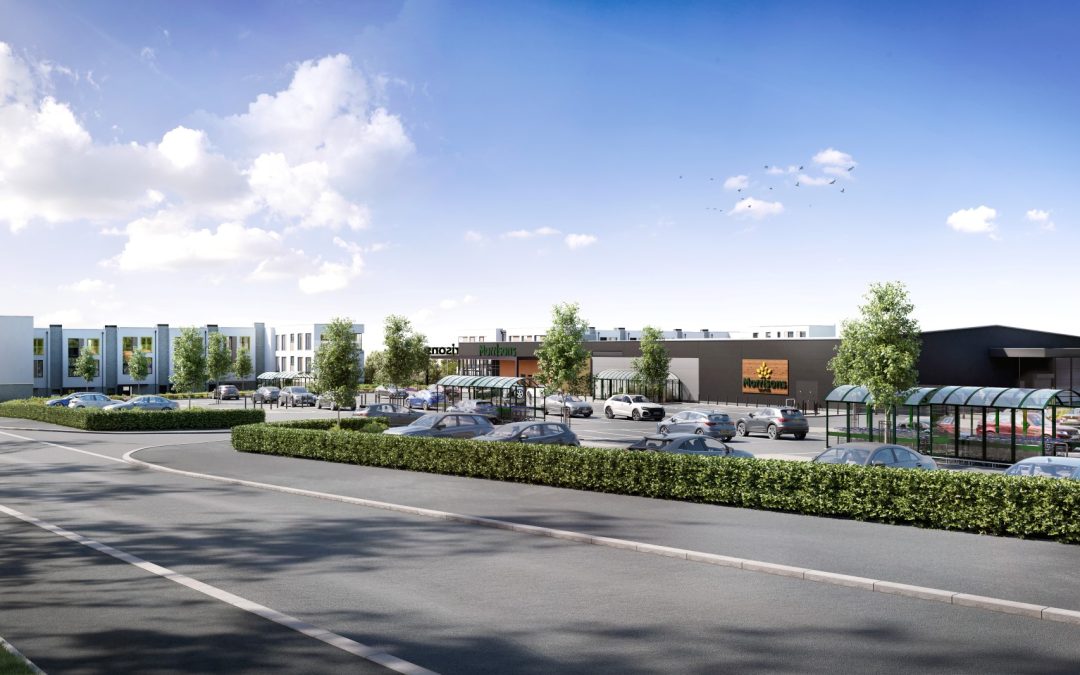 East Devon District Council has approved funding of up to £5.5m for the acquisition of town centre land in Cranbrook, as well as approving three planning applications for a supermarket, high street shops with apartments above, a town square and a children’s day nursery – all bringing the 21st century town centre closer to a reality.

The £5.5m investment is funded by the Exeter and East Devon Enterprise Zone from borrowing against future ring-fenced business rate income. By securing this land, the Council can make sure that the new town centre will be able to grow and develop over time, including providing workspace to meet the needs of a growing population. This sits alongside current plans to provide space for shops and community facilities including a children’s centre, youth centre, library, town council offices, health and wellbeing hub, a leisure centre and a skatepark. Ultimately, Cranbrook will grow to around 8,000 homes for a population of around 20,000 people.

Work on the supermarket and nursery is due to be completed by summer next year, followed soon after by the high street shops, apartments, town square and children’s day nursery.

Agreement on the details underpinning these much-needed facilities for the town has been coordinated by the Cranbrook Strategic Delivery Board. The Board is a partnership of Councillors from Cranbrook Town Council, East Devon District Council and Devon County Council who all played an important role agreeing the way forward with the developer consortium (Cranbrook New Community partners in conjunction with Henry Davidson Developments [HDD]).

This is a monumental moment for the town where the “coming soon” notion actually becomes a reality over the next few months. Through partnership working across all levels of local authority and with the consortium of developers, Cranbrook will now finally have its much needed centre. I couldn’t be happier for the residents.

We are delighted that the planning applications have finally been approved after a long and sometimes tortuous process, and that the construction work can begin. The new buildings will at last give Cranbrook a heart with many of the shopping, service and social facilities that we have all been waiting for, and will act as the focal point around which the rest of the town centre will grow and develop in the coming years. Our thanks go to all those who have worked so hard to overcome the obstacles in the way of delivering what will be a welcoming centre for Cranbrook and its surrounding villages and hamlets. A little celebration is in order.

This long awaited news will undoubtedly bring significant benefits to the community. For example being able to shop locally I believe will have a positive impact on the people that live in and around Cranbrook. Not to mention the benefits locally to the environment, economy and the potential of local employment opportunities.

I’m delighted that Devon County Council’s Cabinet has accepted the Cranbrook New Community Partners offer of a £3 million phased contribution and a 0.4ha parcel of land in the town centre to enable the delivery of a new community building which will deliver Devon County Council services to the residents of Cranbrook.

Cranbrook is rapidly expanding and I have no doubt it will grow to become one of Devon’s most important towns.

Through a productive partnership with other councils, developers and community representatives we are laying the groundwork for that future and are we are working hard to achieve a consensus for the benefit of its community.

We are delighted that the planning consents have been issued for the new town centre at Cranbrook. This now allows us to progress  to the construction phase so that much-needed facilities can be delivered for Cranbrook residents.

A spokesperson for the Cranbrook Consortium of developers, said:

The approval of plans for the town centre at Cranbrook is a hugely significant step for this growing community.

Residents at Cranbrook already benefit from facilities such as shops, a cafe, healthcare and education. The town centre will bring even more vibrancy to the neighbourhood and we are very happy that work can now begin.

This website uses cookies to improve your experience while you navigate through the website. Out of these cookies, the cookies that are categorized as necessary are stored on your browser as they are essential for the working of basic functionalities of the website. We also use third-party cookies that help us analyze and understand how you use this website. These cookies will be stored in your browser only with your consent. You also have the option to opt-out of these cookies. But opting out of some of these cookies may have an effect on your browsing experience.
Necessary Always Enabled
Necessary cookies are absolutely essential for the website to function properly. This category only includes cookies that ensures basic functionalities and security features of the website. These cookies do not store any personal information.
Non-necessary
Any cookies that may not be particularly necessary for the website to function and is used specifically to collect user personal data via analytics, ads, other embedded contents are termed as non-necessary cookies. It is mandatory to procure user consent prior to running these cookies on your website.
SAVE & ACCEPT