Topping out of the Ada Lovelace Building at Exeter Science Park

Topping out of the Ada Lovelace Building at Exeter Science Park 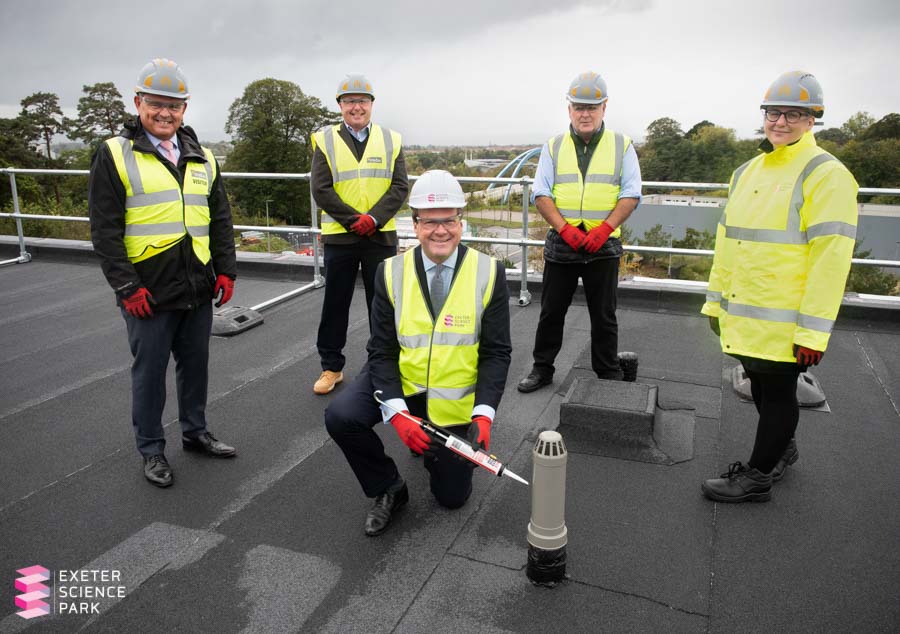 A topping-out ceremony at the Ada Lovelace Building has marked another significant milestone for Exeter Science Park, in the development of the South West’s leading centre for science, technology, engineering maths and medical (STEMM) businesses.

The Ada Lovelace Building is due to be completed in February 2021. The building will bring 150 jobs to the region when its tenants move in from Spring 2021. This is in addition to sustaining hundreds of jobs during the construction phase.

The speculative development of 20,000 square feet over three floors will be net-zero-carbon for operational energy as a result of innovative design features including 44kw solar voltaic roof panels. Its internal spaces can be configured to suit tenants’ requirements, with workspaces ranging from 1,500 to 6,000 square feet available on each of three floors.

Dr Sally Basker, CEO of Exeter Science Park, explained: “Our mission is to help innovative STEMM companies deliver extraordinary growth and Exeter Science Park is a prime location for knowledge-based companies to achieve great success, thanks to the location, the environment and the collaboration opportunities.

“In an uncertain economic climate and despite the COVID-19 restrictions, we are extremely proud to have reached this impressive milestone and to be delivering a building that will help to drive productivity and economic growth for our region, create new jobs and retain local talent.

“We’ve had significant interest from a wide range of STEMM companies interested in taking space at the Ada Lovelace Building, both businesses that started life in the South West and others which are looking to relocate here.”

There are currently around 500 people employed by the tenant businesses at Exeter Science Park and projections forecast a seven-fold growth over the next 15 years, taking employee numbers to 3,500 by 2035.

Councillor Paul Arnott, Leader of East Devon District Council and Chair of Exeter and East Devon Enterprise Zone Board said: “Our district is very fortunate at this time to have a new building with outstanding green credentials focussing on Science, Technology, Engineering, Mathematics, and Medicine. The skills and knowledge facilitated there will play a key role in the future economy and wellbeing of East Devon.”

The Ada Lovelace Building has been designed by architects LHC Design and KTA, working for NPS South West Property Consultants. It is being built by Midas Construction, part of the Midas Group.

Karl Tucker, Chair of the HotSW LEP, said: “We’re delighted to see yet another milestone in our Growth Deal programme; the Ada Lovelace Building provides innovation space for STEMM businesses to create high-value jobs. As we work towards our Recovery Plan, we need to focus on these sectors as we build back better with a cleaner and more inclusive economy.”

East Devon District Council’s Cabinet has invested £1.1m in the development of the building in conjunction with Devon County Council as part of the Exeter and East Devon Enterprise Zone programme.

Mike Borkowski, Business Development Director at Midas Construction, said: “It is a source of great pride to Midas, as a business which grew out of Exeter, to be celebrating the topping out this important project for Exeter Science Park, the city and wider region.

“Midas is committed to leaving a positive impact in the communities it operates in, and working together with the project team, partners and SCF, the Exeter Science Park project is enabling us to continue to support skills development and local employment. This has included working with our local supply chain, creating new jobs on this project through delivery of a National Skills Academy for Construction (NSAfC) Employment & Skills plan, supporting a programme of construction careers advice, and we’re mid-way through completing an anticipated 100 training weeks on site for our construction technician, scaffold and carpentry apprentices.”

The Ada Lovelace Building, named after the 19th Century mathematician and computer scientist, is the fifth purpose-built unit to be delivered by Exeter Science Park Limited, providing office and laboratory space on the specialist campus which opened its iconic white Exeter Science Park Centre in 2015.

The past five years has also seen the opening of the multi-million-pound Lamarr, Newton and Turing buildings, providing “grow-on” space for STEMM businesses. Their neighbours include the Met Office’s High Performance Supercomputer Building and Collaboration Centre and the University of Exeter’s pioneering VSimulators facility.

The name of the new building was chosen by students attending the ‘Big Bang Fair’ at Westpoint Arena in 2019, where an overwhelming majority of schoolchildren voted for Ada Lovelace from a shortlist of three inspirational figures.

To find out more about Exeter Science Park, visit www.exetersciencepark.co.uk.

This website uses cookies to improve your experience while you navigate through the website. Out of these cookies, the cookies that are categorized as necessary are stored on your browser as they are essential for the working of basic functionalities of the website. We also use third-party cookies that help us analyze and understand how you use this website. These cookies will be stored in your browser only with your consent. You also have the option to opt-out of these cookies. But opting out of some of these cookies may have an effect on your browsing experience.
Necessary Always Enabled
Necessary cookies are absolutely essential for the website to function properly. This category only includes cookies that ensures basic functionalities and security features of the website. These cookies do not store any personal information.
Non-necessary
Any cookies that may not be particularly necessary for the website to function and is used specifically to collect user personal data via analytics, ads, other embedded contents are termed as non-necessary cookies. It is mandatory to procure user consent prior to running these cookies on your website.
SAVE & ACCEPT