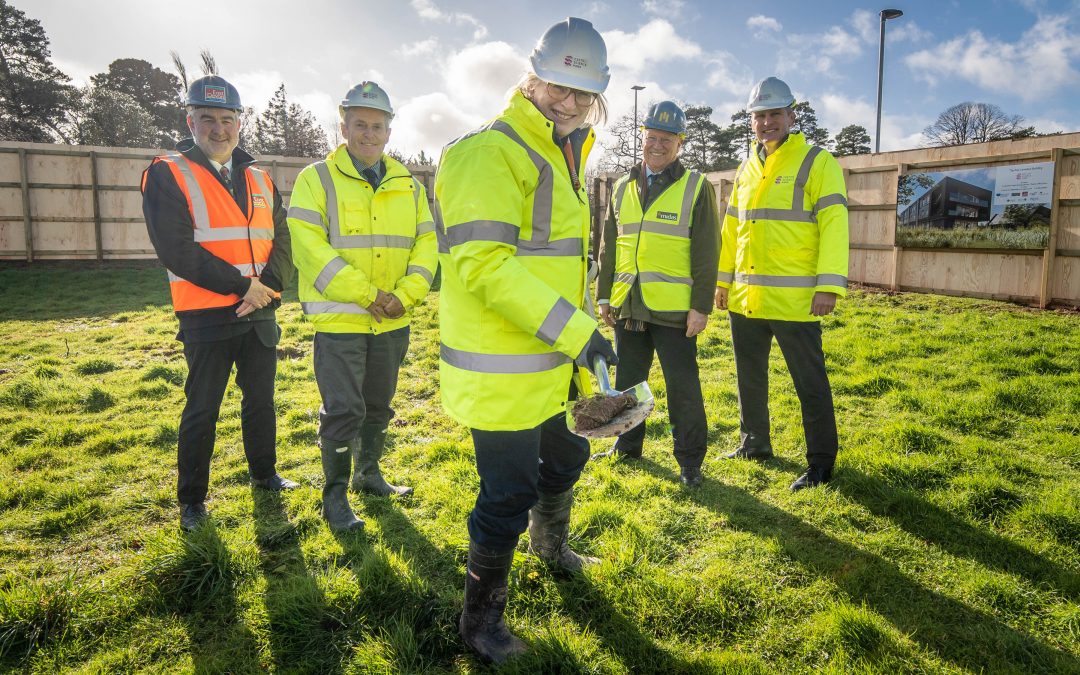 Work on the new Ada Lovelace Building at Exeter Science Park has started.

The 20,000 square foot laboratory space and speculative office will aim to be net zero carbon for operational energy as a result of innovative design features, including 44kw solar roof-mounted solar-voltaic panels.

The Ada Lovelace Building is named after the 19th Century mathematician and computer scientist. It is being built by Midas Construction, part of the Midas Group.

A turf-cutting ceremony marked the start of work on the building which is due for completion in November 2020, bringing up to 150 jobs to the area.

The building has been designed specifically for science, technology, engineering, maths and medical (STEMM) businesses and its internal spaces can be configured to suit tenants’ requirements. Workspaces ranging from 1,500 to 6,000 square feet available on each of three floors.

Dr Sally Basker, CEO of Exeter Science Park, said: “Our mission is to help innovative STEMM companies to deliver extraordinary growth and the Ada Lovelace Building will be the prime location for knowledge-based companies, both those from the Science Park looking to take their next step and new firms looking to relocate and grow.

“As well as helping to meet the demand for high-quality office space in the region, the innovative design of the building means that it will make more than it will take, being net zero carbon and highly sustainable.”

East Devon District Council’s Cabinet has invested £1.1m in the development of the building in conjunction with Devon County Council as part of the Exeter and East Devon Enterprise Zone programme.

Councillor Ian Thomas, East Devon District Council’s portfolio holder for finance and Chair of Exeter and East Devon Enterprise Zone Board, said: “The Science Park is the flagship project within the Exeter and East Devon Enterprise Zone. This new building will build on the success already being realised at Exeter Science Park, with space in high demand. The Ada Lovelace Building will provide further opportunities for high-quality, high-value jobs in our district.”

Karl Tucker, Chair of the HotSW LEP, said: “The new Ada Lovelace Building – formally known as the Open Innovation Building – is one of our Growth Deal funded projects designed to boost the economy in key sectors throughout the Heart of the South West.

“Exeter Science Park is a thriving business location and part of our portfolio of Enterprise Zones; and this new facility will be a valuable asset in attracting innovative, knowledge-based companies to our area.”

Mike Borkowski, Business Development Director at Midas Construction, said: “As a company with its roots in Exeter, we are proud to be working with Exeter Science Park to expand its facilities, providing high-quality space to attract businesses and further supporting innovation and economic growth in the city and region.

“Midas is committed to leaving a positive impact in the communities it works in, and throughout this project we will be supporting skills development and local employment, including through a programme of construction careers events for job seekers, creating new job opportunities, supporting student work placements and continuously developing the skills of the workforce on site.”

The building has been designed by architects LHC Design and Kensington Taylor, working for NPS South West Property Consultants.

Any cookies that may not be particularly necessary for the website to function and is used specifically to collect user personal data via analytics, ads, other embedded contents are termed as non-necessary cookies. It is mandatory to procure user consent prior to running these cookies on your website.